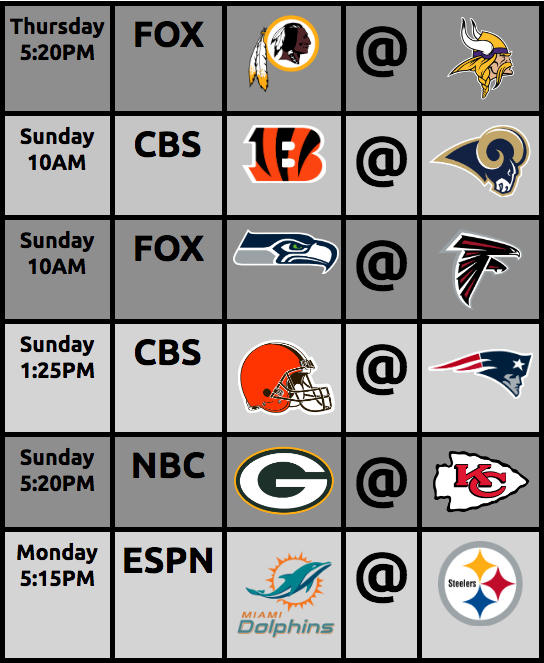 Last week was officially graded as a “solid” week for NFL on TV in the Portland-Metro Area. Will this week be any different? Let’s find out.

Here is what we have coming up for Week 8:

This is terrible! The Redskins might be the worst team in football. The Vikings have the most boring generic create a player white QB.

This is terrible! The Bengals might be the worst team in football. The Rams have a few superstars, but not enough for me to tune in to this game.

This is terrible! The Falcons might be the worst team in football. By now, you should know how I feel about watching the Seahawks play.

Finally – a watchable game. The Browns have their version of solid players, the Patriots are the Patriots. Should be a good game, could be a blowout.

I despise Aaron Rodgers. The Chiefs are fun to watch, but are they fun to watch with Matt Moor at QB?

This has to be a joke, right? There is no way that this is the Monday Night game.

This might actually be “The Worst” week of football games we have had on TV. The Falcons, Redskins, Steelers, Dolphins, and Bengals have combined for a 4-29 record. We somehow have the opportunity to watch them all play this week. Yikes.