Many contributors to Hefty Headlines were invited to participate in our Week 14 poll. Five members of the crew participated, Stormin’ Mormon half-assed it and only submitted his picks.

Our top three remains untouched, however, Oklahoma now slides in tied with Georgia at #4. Michigan and Minnesota fall out of the top ten this week, they are replaced by the Oregon Ducks and Baylor Bears.

The race for the best winning percentage is heating up – it is down to three real contenders. Tommy Nuggets is in the lead, but Stormin’ Mormon and Chamby are right on his tail. Bix and Klyde Frog are in the back of the pack, and I have all but eliminated myself.

Root for chaos. Let’s see what happens if we get wins from Oregon, Georgia, Wisconsin, Virginia, and Baylor!

Many contributors to Hefty Headlines were invited to participate in our Week 13 poll. Five members of the crew participated:

Our top four remains untouched. The Oregon Ducks and Penn State fall out of our top ten – they are replaced by Florida and Michigan.

Rivalry week. Let’s hope for some big upsets to shake up this playoff picture. 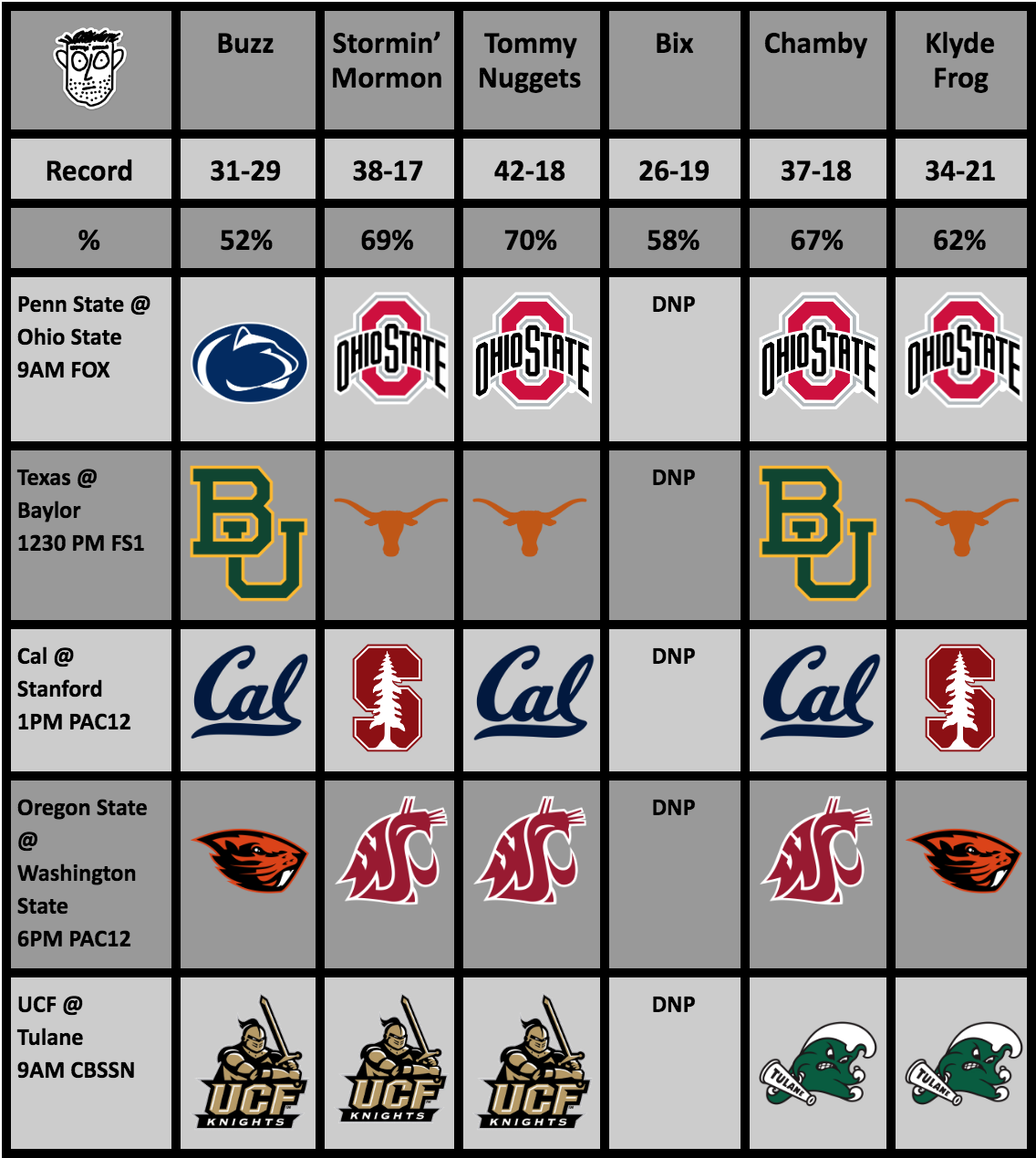 Down go the Golden Gophers! Down go the Baylor Bears! We lost two more undefeated teams this week.

Many contributors to Hefty Headlines were invited to participate in our Week 12 poll. Five members of the crew participated:

Our top three remains untouched – it is hard to imagine a playoff scenario without LSU, Ohio State and Clemson. The Georgia Bulldogs jump up to #4, leapfrogging Oregon and Alabama.

This is honestly bullshit. I went all out last week and picked against the grain – only to go 0-5.

We have one great game this weekend, Penn State @ Ohio State. The rest of the weekend looks pretty “meh”. Hopefully the Nittany Lions can shake things up in the Big 10 and take down The Buckeyes.

Down go the Nittany Lions! Down go the Crimson Tide! We lost two more undefeated teams this week.

Many contributors to Hefty Headlines were invited to participate in our Week 11 poll. EVERYONE participated:

Alabama falls out of our top four this week after losing to the clear #1 team in the country LSU. The Oregon Ducks somehow snake their way into a playoff spot this week. Finally, the Golden Gophers get some respect after defeating former #4 Penn State.

This weekend we have an elimination game in the Big 12 – the loser likely out of playoff contention. The Baylor Bears could prove to be a real contender with a win over Oklahoma.

Minnesota gets a chance to prove they are for-real for-real with a game on the road at Iowa. 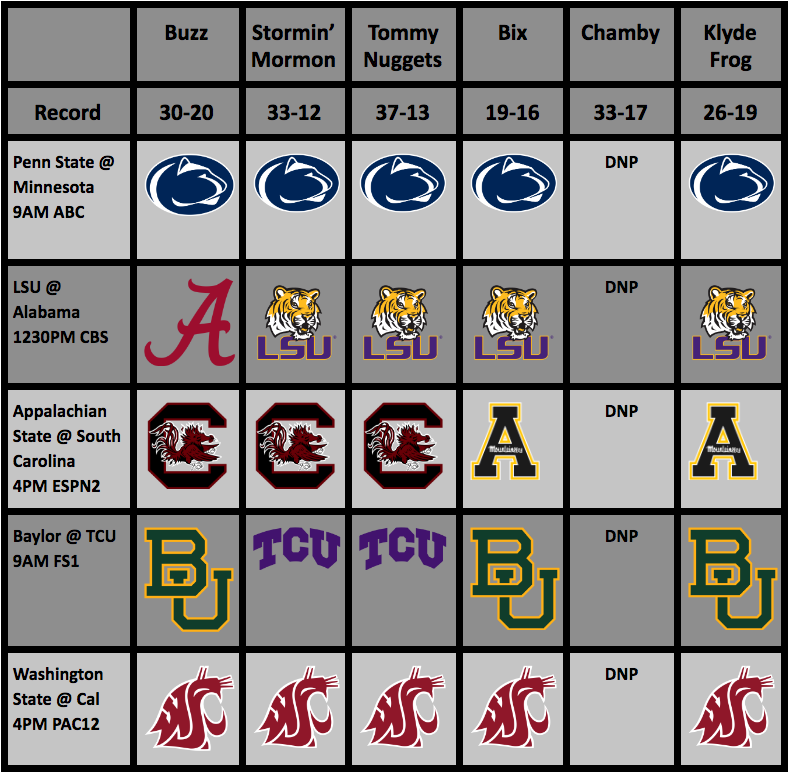 We lost another undefeated team for the fourth week in a row – the SMU Mustangs fell to the Memphis Tigers on Saturday night.

Many contributors to Hefty Headlines were invited to participate in our Week 9 poll. EVERYONE (except for Chamby) participated:

Our top three teams remained unchanged this week. Georgia and Oregon each found themselves tied for #4 after their big wins this weekend. There is some clear voting bias in our poll – Clemson and Penn State only showed up in 4/5 top tens – greatly impacting their rankings.

Penn State @ Minnesota and LSU @ Alabama. Do I need to say more than that to get you excited for this weekend?

The Oklahoma Sooner football team fell this week to unranked Kansas State. In three consecutive weeks we have had an undefeated team lose to an unranked team.

Many contributors to Hefty Headlines were invited to participate in our Week 9 poll. EVERYONE participated:

The LSU Tigers remain our number 1 team in the nation. Ohio State jumped Alabama. Penn State and Florida round out our top five. Our biggest drop went to #10 Oklahoma, who fell six spots after their loss to unranked Kansas State.

Due to consistent bitching from our pollsters – we now will produce a weekly top ten, rather than a weekly top 25.

This weekend is decent – but I am looking forward to the following weekend. On November 9th we have Penn State @ Minnesota and LSU @ Alabama.
– Buzz

Another week, another upset. Wisconsin loses a shocker to Illinois – one week before their big game against Ohio State.

Many contributors to Hefty Headlines were invited to participate in our Week 8 poll. Five members of our committee participated:

The LSU Tigers remain our number 1 team in the nation. They are followed by Alabama and Ohio State. Oklahoma jumped Clemson to become our new #4. Our biggest drop went to #22 Boise State, who fell nine spots after their loss to unranked BYU. #12 Oregon somehow fell three spots despite beating Washington on the road.

Wake Forest, and Iowa State re-enter our poll this week. 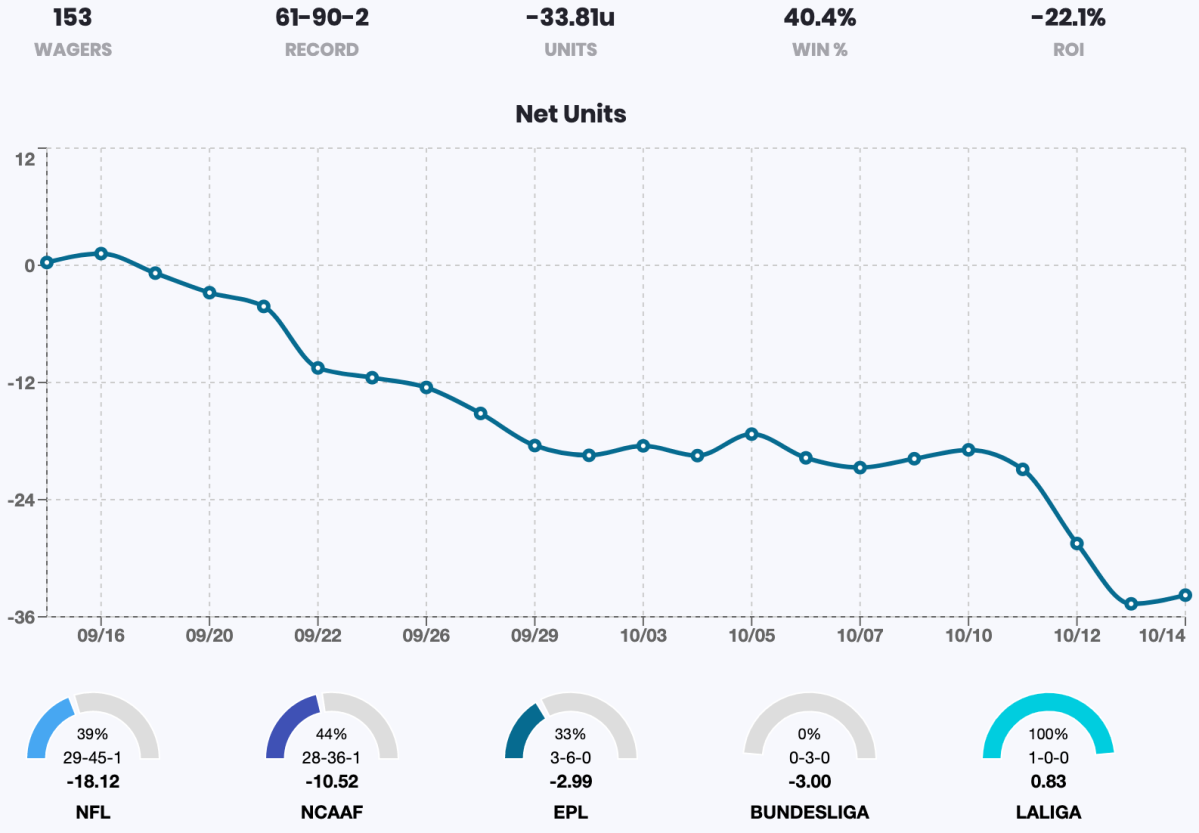 A new week deserves a new approach. It is always darkest before the dawn. Tomorrow, tomorrow, there’s always tomorrow. Tomorrow is a new day.

Without further ado – it is time to go down the rabbit hole and look ahead at this week in football.

I need a new approach. In the past I have thrown out endless picks, hoping more would be winners than not. Obviously, that was stupid. I enter the week with a new approach – I will only pick games in which I have some idea of what is going on.

Overall, I have no idea what I am doing. Anyways – here are my picks for the upcoming weekend in sports:

I don’t want to make any guarantees, but I think we are looking at a 10-0 week here. I would never tell anyone what to do with their money, however…

Down goes Georgia! Wow! What a surprise that was. The South Carolina coaching staff did everything they could to gift that game back to the Georgia Bulldogs – somehow they still came away with the big upset.

Many contributors to Hefty Headlines were invited to participate in our Week 7 poll. For the first time ever, we had just four people participate:

We have a new #1 this week – the LSU Tigers. They jump four spots after defeating now #8 Florida. Our biggest drop went to #9 Georgia, who fell seven spots after their loss to unranked South Carolina. #5 Oklahoma also gained some ground after beating now #14 Texas.

Wake Forest, Memphis and Virginia are the three teams that dropped out of our top 25 – they were replaced by Minnesota, Appalachian State, Missouri and Tulane.

Michigan @ Penn State has to be the game of the week for me. I am already looking ahead to next weekend – Wisconsin @ Ohio State, Auburn @ LSU, and Notre Dame @ Michigan.

QB1: Beyond the Lights is a reality/football show that is streaming on Netflix. In each season, camera crews follow three top football recruits through their senior year of high school. I look forward to this show every year – it helps bridge the gap between All or Nothing on Amazon, Last Chance U on Netflix, and Hard Knocks on HBO. It also reminds me a bit of MTV’s Two-A-Days from my teenage years. The part that has been missing from QB1 is a follow-up episode detailing what has happened with all of these players since their time on the show.

I am here to answer the question: Are the QB’s from QB1 still QB1’s?

Jake Fromm has started all but his first game throughout his Georgia career. Thanks to a Jacob Eason injury in the 2017 season opener – Fromm was vaulted into the starting QB job for the Bulldogs. Since then has solidified himself as one of the premier college QBs in the nation.

In 2018 Fromm led the bulldogs to a 11-3 record. They maintained a top 10 ranking throughout the entire season. They lost on the road at LSU and to Alabama in the SEC title game – before losing to Texas in the Sugar Bowl.

In 2019 the Bulldogs were the #3 ranked team through October 6th – but that fell to #10 following a surprise 2OT loss to South Carolina.

Bowers, now a Redshirt Sophomore, has seen action in just one game during his career at Wake Forest. During his Redshirt Freshman campaign he played 8 snaps against Towson – handing the ball off each time.

The Redshirt Sophomore has had quite the journey so far. He redshirted his first year at Ohio State and appeared in 6 games as a Redshirt Freshman.

Martell transferred in the spring of 2019 – likely as a result of Justin Fields announcing his transfer to Ohio State – finding himself at the University of Miami. He was granted immediate eligibility – and his transfer waiver was likely approved due to a coaching change in Columbus. He arrived in South Beach with high hopes – but finds himself behind two players on the QB depth chart – while also practicing at WR.

Justin Fields played a limited role for the Georgia Bulldogs during his Freshman campaign. He was ultimately the backup to Jake Fromm – and playing time was hard to come by.

Justin Fields spent one year in Athens before transferring to Ohio State. Fields was allowed to transfer and play immediately – his reason for transferring was being the receipient of racist comments from a fellow Georgia Student-Athlete.

Fields was named the starter in Columbus and has looked unstoppable so far in 2019. He has become a legit Heisman contender after leading the Buckeyes to a 6-0 start.

Hartman earned the starting QB job as a True Freshman coming out of preseason camp in 2018. He was off to an impressive Freshman campaign until he broke his leg against Syracuse with four games left on the season.

Hartman lost the starting job to Jamie Newman following his injury – and had yet to appear in a game until this past week against Louisville.

In 2018, Mitchell appeared in one game – but was still able to earn a redshirt. Mitchell has appeared in 3 games for the cyclones in 2019. Besides his passing stats below, he has also rushed the ball 9 times for 92 yards and 1 score.

Uiagalelei was visible in the background of QB1 Season 2. He was the backup quarterback to Re-al Mitchell at St. John Bosco – eventually earning some playing time. Uiagalelei has ascended to the top of the recruiting charts – and is committed to the Clemson Tigers. He is the #1 QB for the class of 2020 and the #12 recruit overall.

LeGendre has made one appearance so far this season. He ran the ball twice for 30 yards in Maryland’s 79-0 win over Howard.

The last time we saw Rattler, he did something sketchy and was ruled ineligible to play the remainder of his senior high school football season.

He arrived at Oklahoma and was immediately thrust into a battle for the starting QB job. Ultimately the job went to Jalen Hurts, and that has proven to be the correct decision so far.

JD Johnson was Rattler’s backup at Pinnacle High School. He is currently a 3-star recruit and has committed to play for Jim Harbaugh at Michigan. He is ranked as the #16 Pro-Style QB for the class of 2020 – and #389 overall.

This has to be the least likable QB to appear on QB1 so far. The over-religious family, the Dad-Coach that really only cared about his son. A player focused on breaking school records. Scalzo’s year ended when he tore his ACL.

He arrived at Kentucky and tore the same ACL again – he is due to have surgery on the re-injured knee.

The next crop of players has been announced for the upcoming season of QB1:

Most of the players to appear on this show have found some playing time at the collegiate level. The most successful so far have been Fromm, Fields and Hartmann. Others, like Martell, seemed primed to make an immediate impact at the next level, but have hardly played. Regardless of what these guys have done so far, it will be interesting to see how their careers turn out.